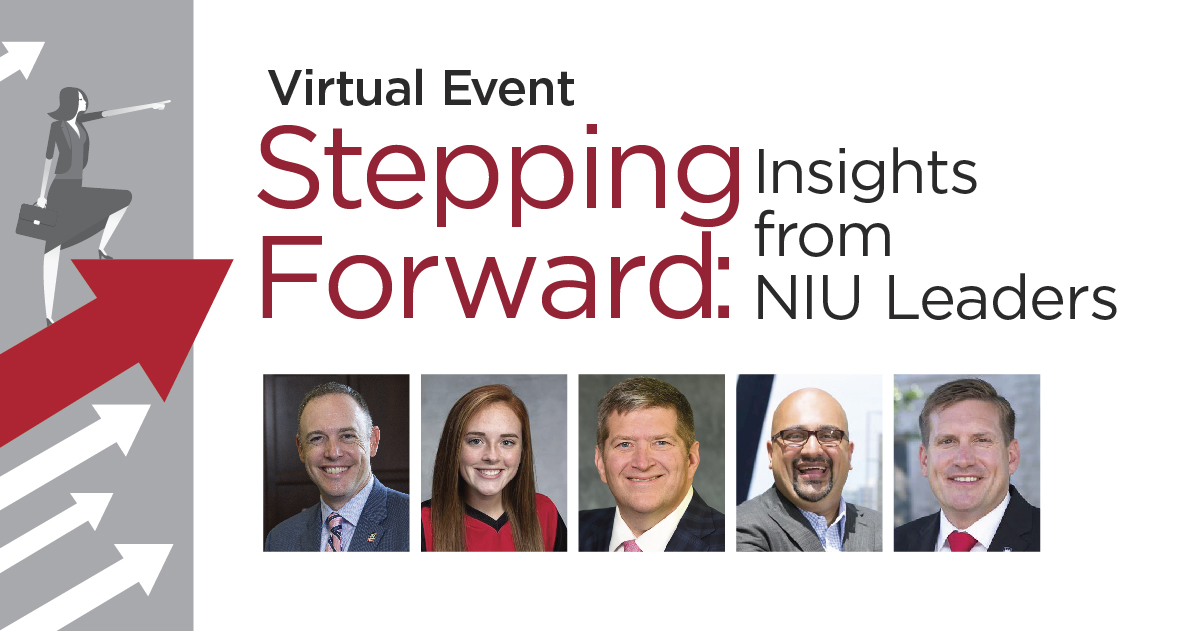 Join NIU Leaders for an engaging discussion centered on navigating change where they will share their experiences and answer questions from the audience. The discussion will be moderated by the Executive Director of the Center for Innovative Teaching and Learning, Dr. Jason Rhode.

You will receive a link to join the event after you register. This is a JobsPLUS online event in partnership with the NIU Alumni Association.

Matthew Streb is chief of staff to the president, liaison to the Board of Trustees and professor of Political Science at Northern Illinois University. His research examines voting, elections and public opinion. His research has been featured on C-Span’s Washington Journal and has been mentioned in such places as The New York Times, Wall Street Journal, USA Today, Washington Times, Washington Monthly, and Chronicle of Higher Education. In 2009, Streb was recognized by the NIU Foundation for "Faculty Excellence." Streb received his Ph.D. from Indiana University in 2000.

Brent Brodeski, ’88, M.B.A. ’91, is the founder, CEO, and financial advisor for Savant Wealth Management. His efforts have earned him recognition as a financial advisor as well as a community member. He was ranked as the no. 1 independent financial advisor for the Chicagoland area in 2009, #40 on Forbes’ top 250 wealth advisors list in 2017, and he has co-founded multiple industry-related groups and associations. Brodeski currently volunteers for the NIU Foundation Board of Directors, among other industry boards, and has navigated change through multiple bear markets, the evolution and consolidation of the independent financial advisory industry, multiple successful acquisitions, and the re-capitalization of Savant four years ago where he expanded firm ownership to nearly 100 owners with 75 employees, including several Huskies, and outside capital. Brent earned a bachelor of science degree in finance with a minor in economics and an M.B.A. with an emphasis in accounting from NIU. He is also a certified financial planner, CPA, a chartered financial consultant and, most recently, he completed his Level 2 WSET (wine) Sommelier certification.

Sankat Patel, ’00, is senior vice president and national regional director of commercial treasury management at Fifth Third Bank, with more than 20 years of experience across a wide variety of industries. He was recognized as a Chicago United “Top 50 Business Leader of Color” in 2019. In 2018-19, he led the treasury management portion of a multi-billion dollar merger between Fifth Third Bank and MB Financial Bank, where he oversaw the integration of both the technology systems and the sales team and its processes. As a result, his is the third largest bank in branches and assets in Chicago. Sankat has also organized numerous advisory councils across the U.S. and spoken on best practices in his field at industry conferences and roundtables. Sankat received his bachelor’s degree from the College of Business at Northern Illinois University in 2000 and completed his executive MBA from the University of Chicago‘s Booth School of Business in 2013. He became CTP-certified in 2002. In addition, Sankat currently serves as vice president for the Northern Illinois University Alumni Association.

NIU senior Kira Mickelson is a Pre-Physical Therapy major and member of the NIU Softball team from Wheatland, Wisconsin and a graduate of Westosha Central High School. Kira is a LEAD Huskie and has been chosen as a first-team All-MAC selection and earned Academic All-MAC honors. In 2020 she saw action in all 22 games, starting 21 of them. She ranked in the top five in seven offensive categories.

A link to the Zoom meeting will be sent with your registration confirmation.