The NIU Board of Trustees voted to lower fees and freeze tuition for the 2018-2019 academic year during its Dec. 7 meeting.

“We realize that earning a degree from an institution like NIU can be life-changing for a student, and we are committed to keeping NIU affordable,” said Chair Wheeler Coleman. 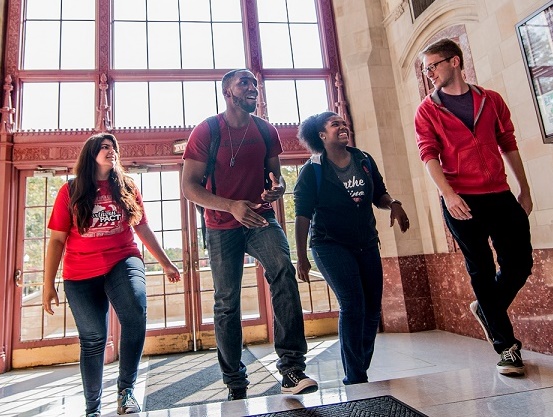 The board voted once again to lock in NIU tuition at the same level that the university has charged since the 2015-2016 academic year. Students will pay $348.84 per credit hour for the first 11 hours of courses. Those who take 12 or more hours will have their tuition capped at $5,332.80 per semester, creating an incentive to take heavier course loads and graduate more quickly. The rate will apply to students who enroll in the 2018-2019 academic year and will remain constant for nine consecutive semesters, per state and university policy.

Students majoring in the high-demand areas of engineering and computer science will pay a differential rate that is $40 per credit hour higher. The higher rate offsets costs to ensure that labs and other resources are up to current industry standards.

The board also approved a decrease in undergraduate student fees of 0.5 percent (excluding the health insurance fee, which students can waive with proof of insurance). The largest reduction was a 90-cent per-credit-hour cut in the health and wellness charge, made possible due to efficiencies realized through the university’s program prioritization efforts. The board also approved a 30-cent per-credit-hour reduction in the athletic program fee.

Room and board rates for double occupancy rooms will remain unchanged.

Students choosing to live in single-occupancy rooms will see an increase of about 4.5 percent since these rooms are in greater demand. Housing rates approved do not pertain to the New Hall and Northern View Apartment complexes on campus. Those facilities are operated as a public-private partnership and rates are set by an outside agency.

In October, the board eliminated out-of-state tuition for undergraduate and graduate students other than those enrolled in the College of Law. To stay competitive, the board also voted last Thursday to extend the in-state tuition rate structure to all College of Law students residing in the U.S. These tuition rates taken effect next fall. Currently, law students from outside of Illinois pay double the rate charged in-state residents.

The National Jurist Magazine has rated the College of Law as a best-value school for the last four years.

“These actions significantly demonstrate NIU’s commitment to keeping higher education accessible and affordable,” said Sol Jensen, vice president for the Division of Enrollment Management, Marketing and Communication. “That affordability, combined with our excellent programs, should make NIU an even more attractive choice for students looking for a degree that will help them succeed in life.”