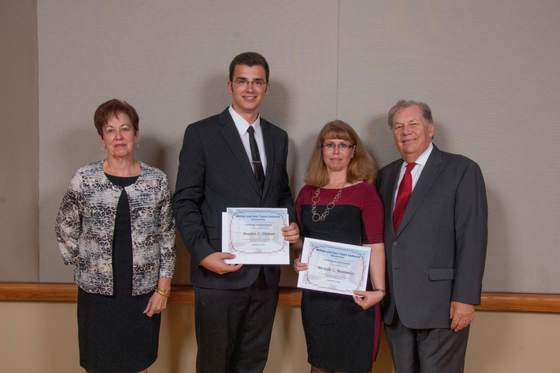 Forty-five years passed between the time Bill Taylor graduated from Illinois Valley Community College (IVCC) and the afternoon he stood before a gymnasium filled with a new generation of bright-eyed grads at their commencement ceremony.

“I still remember being scolded by the dean for arriving late to graduation directly from an all-night poker game,” says Bill.“He was not impressed when I explained that I had been the ‘big winner.’”

In the years that followed, Bill eventually managed to impress his former dean—and many others—as he helped make history in the financial world and changed countless lives for the better.

Bill says that he and his wife, Dian, owe much of what they’ve accomplished to the people who invested in them. In return, they have given back to key institutions that have helped them along the way, including a generous estate gift to NIU that will continue their current scholarships and provide future strategic funding for the University.

After IVCC, Bill Taylor enrolled at NIU where he took his first accountancy course.“I had found the right career,” Bill says. “I had the natural ability for accounting and finance, and was eager to learn more about business.”

With his world-class NIU degree in hand, Bill’s next step landed him at Deloitte, one of the largest professional services firms in the world. After becoming a partner, he led the team that assisted with the first-ever multibillion-dollar leveraged buyout, a transaction that would forever change corporate America.

After that, he led Deloitte’s effort supporting the buyout of RJR Nabisco for $30 billion, a transaction made famous in the best-selling book and film Barbarians at the Gate. In recognition of his many contributions, his partners elected Bill to the US and international boards of Deloitte.

Great Things Happen With the Help of Others

As smart financial minds, Bill and Dian were sure to maximize the impact of their gift.

“We have been fortunate enough to provide for our family and charity in our estate plan,” Bill says. “Tax benefits from making the charitable donation out of our IRA allow our money to do a lot more.”

The Taylors’ estate gift does a great deal. For starters, it endows their much-needed scholarship support. To date, the Taylors have provided 16 scholarship awards.

“I was surprised to learn how much today’s students pay in tuition and fees for an opportunity we had virtually for free,” Bill notes. “Paying for college is a hardship for many families.”

He’s right. Dwindling state support has made a college education much less affordable than it once was. These days, a student working a full-time summer job at minimum wage can pay

only 14 percent of his or her expenses. And, as college costs rise, government programs to help students pay are becoming strained.

Tyler Swanlund (’13), senior audit associate at KPMG, says he often reflects on the gift that helped get him through school. “It reminds me to always put in the extra effort at everything I do,” he says.

Mandie Paterimos Ehret (’12) remembers well the motivation her scholarship provided. “I worked so hard and got all A’s and one B, and I was so happy to tell Mr. Taylor about that,” she says. Today, Mandie is a member of the marketing team at Mowery and Shoenfeld, LLC.

Periodic Change Is Important; Prepare for It

The planned gift from the Taylors’ IRA also provides discretionary funding for University leaders to address pressing needs and seize promising opportunities as they arise. They hope other donors will help NIU navigate the changing environment of higher education with similar, unrestricted gifts.“Needs change as the University evolves. None of us know exactly what the University will need tomorrow,” Bill says.

“Winners give back. Big winners give more,” Bill said as he wrapped up his graduation address that afternoon. “Start with your community and school. They have invested in you.”

Currently, NIU’s greatest opportunity lies in recruiting and retaining talented, grateful students like Tyler and Mandie. Scholarships do just that. In fact, nine out of 10 NIU Foundation scholarship recipients graduate.