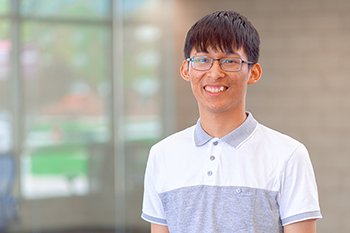 All About the Greater Good: Scholarship propels international student to career in public service

When I Younan An was a young boy growing up in Cambodia, the world came to him: tourists from countless countries regularly descended on his bustling marketplace neighborhood.

Conversing with that steady stream of visitors was an essential part of An’s journey in learning English. Now, having graduated in 2018 from NIU with a political science degree, An is working diligently toward a master’s degree in public administration so that he can make an impact on the world.

“I like to see myself as a global citizen,” said An. “I don’t see myself in one place.”

Last year, his ambition to work for the United Nations or a nonprofit government organization gained additional momentum when he was awarded a scholarship through the John G. and Barbara C. Peters Student Endowment. The financial support ensured the completion of his undergraduate studies.

Among other accolades, An also received the Student Lincoln Laureate prize from NIU in 2018. The award recognizes the top senior from each of Illinois’ four-year universities who exhibit excellence in curricular and extracurricular activities.

An attained a double minor in economics and sociology and a certificate in women’s and gender studies. Eventually, he wants to return to Cambodia.

It’s the fulfillment of a dream that eluded his parents, both of whom are survivors of the Cambodian genocide in the 1970s that curtailed their own educations and opportunities. “I never thought I would receive all of these awards and recognition,” said An.

“It’s a great opportunity and I hope that this story will impact other students from all over the world who want to receive their degree here in the U.S.”