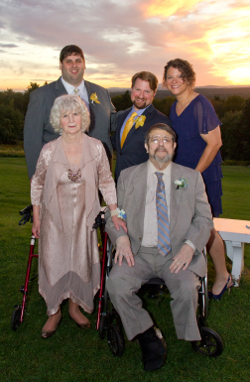 The legacy of two emeriti professors and their affection to Northern Illinois University will live on in the form of scholarships for students majoring in the humanities.

Arthur and Sue Doederlein joined the faculty of Northern Illinois on their seventh wedding anniversary in 1969. That day in September marked the beginning of a passion for the University and its students.

The Doederlein's $100,000 commitment to students is deeply personal—Northern students remind them of how they came of age and their own journeys to get an education and make a better life.

Both grew up in Toledo, children of working-class parents.

"Growing up, I didn't know what a bachelor's degree or Ph.D. was," Sue said. "Our parents knew education was important and supported us, both monetarily and personally."

Both went to DePauw University, a small liberal arts college in Indiana. Arthur was a Rector Scholar, receiving a full-ride scholarship. Sue's education was also funded heavily through scholarships.

The young couple married at the end of Sue's freshman year when Arthur finished his sophomore year.

"Arthur worked two jobs and I worked one and our parents did what they could to support us," Sue said.

Not wanting to be left behind when Arthur graduated, Sue concentrated on her studies and graduated from DePauw in three years.

After finishing graduate school, the couple began their job search.

"We wanted to go to a place where working-class students could get a quality education," Sue recalled. "It was very easy for us to come to NIU."

Arthur served for more than 30 years as the director of Undergraduate Studies in the department of communication, advising students on what courses to take and counseling them on graduate and professional schools and career opportunities. Arthur passed away in August 2012.

Sue was a professor of English who went on to serve as associate dean for Undergraduate Studies in the College of Liberal Arts and Sciences. She assisted NIU students for 45 years until retiring in June 2014.

"The only academic job I ever had was at NIU," Sue added.

Throughout their long tenures, both witnessed students struggle with financing their education as they moved closer toward graduation. "Students receive scholarships and financial aid as first-year students," Sue said. "Sometimes that support doesn't continue through to graduation, and that makes it tough."

Sue knows first-hand about dealing with adversity while earning a degree. The young couple was in the same city for graduate studies, but different schools—Sue at the University of Chicago and Arthur at Northwestern University. Then, the unthinkable happened. Arthur required specialized medical care at the University of Michigan Hospital, which forced the couple to leave Chicago and move back to Toledo with their parents for the duration of the treatment. During this time, Sue was awarded a Danforth Fellowship. Once the medical treatments concluded, the couple returned to Chicago so Arthur could conclude his studies at Northwestern.

"Desperate to resume a normal life, I told Arthur that I'd go to Northwestern rather than returning to the University of Chicago as we'd originally planned," Sue said, adding that at the time she made that offer that she hadn't even applied at the school.

"I got on the phone to the Graduate Admissions Office at Northwestern and told them I wanted to start right away and that I would bring my Danforth Fellowship with me," she said. She was admitted and the rest, as they say, is history.

That experience had a lasting effect on the young couple.

"That was our true discovery about how generous scholarship support could change lives," Sue said.

Paying it forward to enable current students get the education they need to succeed was always in the cards for the Doederleins.

"This scholarship was definitely something Arthur and I knew we wanted to do when we had money," Sue said. "Northern was a very special place for us. It's home for us."

Student scholarship support is an important area of need at NIU. If you would like to help current and future Huskies, please visit go.niu.edu/give2niu today to make your gift in support of the Student Scholarship Fund.